Ryan Manahl is a strong advocate for lawn mower safety.

“Thirteen children visit the emergency room each day with lawn mower injuries,” says Ryan, of Cedar Falls, Iowa. “Fifty-four percent of families with children under the age of 10 allow their kids to ride on a lawn mower—that was me. It’s part of our culture to allow our kids to be around this very heavy equipment with limited safety features.”

Every year in the U.S., more than 9,000 children go to the emergency room for lawn mower-related injuries, according to the American Academy of Pediatrics.

Ryan says children—particularly young children—should be kept indoors while the mower is in operation, and that they shouldn’t be riding, or even sitting, on mowers. While always cautious, Ryan wasn’t a particularly vocal advocate for lawn mower safety until Aug. 30, 2017, when the issue became a personal one.

That day after work, Ryan got home and had to mow his lawn, as well as those of two of his neighbors. His wife, Fonda, took their youngest son, Tate, then 3, to pick up their older son, Cason, from school and to run a few errands. When Fonda and the boys got home, Ryan was already mowing a neighbor’s yard.

He didn’t see or hear Tate come running at him when the toddler got out of the car.

“I was backing up, looked over my right shoulder and felt I had run something over, but I knew there was nothing there,” he says. “I stopped and looked over my left shoulder, but it was too late.”

The lower half of Tate’s body was under the mower.

Ryan lifted the mower off his son while one neighbor called 911. Another neighbor rushed over and tied a tourniquet on Tate’s right leg. Tate sustained severe injuries to both of his legs and to his abdomen.

An ambulance arrived and rushed Tate to a Waterloo hospital. After he was stabilized, he was flown by helicopter to University of Iowa Stead Family Children’s Hospital, where surgeons worked for several hours to save the boy’s life and keep him from losing his legs.

“You never expect to see anything like that, especially with your child,” Ryan says. “He was only 3 at the time—he had always been afraid of sirens, so when I heard them coming I knew he was even more scared.

“I tried to keep him calm but I kept thinking the worst: ‘Is this really it? Is my son going to die in my arms right now and he hasn’t even started to live his life?’”

Joel Shilyansky, MD, surgeon-in-chief for UI Stead Family Children’s Hospital, the state’s only Level 1 Trauma Center, led the trauma team that day. He says Tate was fortunate, and credits the quick actions of Ryan, the neighbors, and the first responders in helping him get to the hospital.

“He was lucky in some ways—Tate had severe injuries to the abdomen and both legs but the major blood vessels and nerves were spared,” Shilyansky says. “He could have easily died from the injuries; his most life-threatening injuries were those in his abdomen.”

The team of pediatric trauma surgeons, plastic surgeons, vascular surgeons, orthopedic surgeons, anesthesiologists, a physical therapist, child life specialists, and nurses came together and worked very hard to first save Tate’s life, then restore his legs, and finally help him recover so he could walk and lead a full life, Shilyansky says.

“That’s why we have a trauma team, a trauma program, and a statewide trauma system—it brings together a whole team of specialists who can provide expert care for injured children. Our goal is not only to save lives, but to provide a good quality of life. The goal with Tate once we knew he was going to survive was to make sure that he was going to walk, go fishing, and play ball in the future.”—Joel Shilyansky, MD, surgeon-in-chief for UI Stead Family Children’s Hospital

After 53 days in the hospital and multiple surgeries performed by orthopedic trauma surgeon Michael Willey, MD, to repair his left leg, Tate was able to go home, but his lower right leg was still in need of serious repair. He was missing three inches of bone in his right leg, which was nearly amputated.

To make a closure that would allow for bone repair, doctors needed to take tissue from another part of the body. Their first attempt to use tissue from the latissimus dorsi or “lat” muscle on his left side, a 12-hour surgical process, was not successful, and the Manahls faced the reality of a possible amputation. But a second attempt, with a plastic surgeon taking from the right side, was successful. In December 2019, Tate underwent his 32nd surgery, this time to remove remaining hardware from inside his leg—a major milestone, Ryan says. 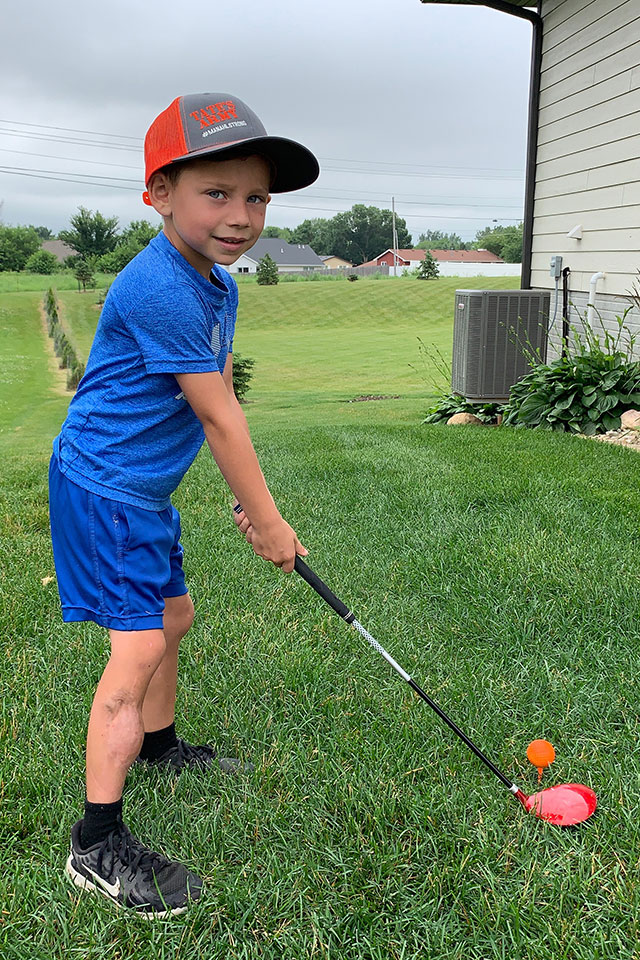 “We will have some decisions to make about if we want to still try to improve on some things down the road, but his legs are saved,” he says. “Knowing that the doctor was comfortable with removing the hardware, and having the confidence, is a good point to be at to give Tate some normalcy.”

Tate wears an ankle-foot orthosis, or AFO brace, to help prevent tripping while walking, due to remaining muscle damage in his right leg that causes foot-drop and affects his gait. Otherwise, he shows no outward signs of the injury. Tate, now 6, started kindergarten in 2019, and, according to his father, loves outdoor activities.

“He’s doing extremely well,” Ryan says. “In those first few critical weeks, we thought he would’ve lost one leg, if not be a double amputee, if he even survived. But if you’d walk by today and see him playing outside with his friends, you’d never know what he’s gone through. We never thought he’d be where he is today.”

When Tate’s younger sister was born, Ryan and Fonda chose her name—Faith— as a symbol.

“We needed faith to get through all the trials, everything that this incident brought out,” he says. “It’s definitely a blessing to be at this stage, where we can see that he’s going to be able to live a normal life. We try to point out every day how thankful we are that he’s still here and try to instill that in him, so he knows how fortunate he is.”

The Manahls are grateful for the care Tate received at UI Stead Family Children’s Hospital.

“The doctors and staff were awesome, and in the Pediatric Intensive Care Unit (PICU) they really made us feel like family,” says Ryan. “They included us in everything, and let us get involved. That helped us, and it helped Tate, too. They made it the best it could possibly be.”

Ryan and Fonda are on a crusade to promote lawn mower safety.

The family has collaborated with UI Stead Family Children’s Hospital to raise funds for children’s health care, and continues to educate about lawn mower injury prevention locally and nationally. Through the campaign, Tate helped hand out information at a booth at the Iowa State Fair, and Ryan spoke at the Safe Kids Worldwide Injury Prevention Convention last summer in Washington, DC.

“Our goal is to not have anyone have to go through what we have, to not have it happen at all,” he says. “Realistically, that might not be possible. But even just saving one limb, or one child’s life—and to give back by helping someone else who is facing what he had to—is all worth it.”

“I used to say this was just a freak accident,” Ryan adds, “but you look at the numbers and see it’s a frequent accident, and one that can be prevented. It all starts with families, and keeping your kids inside when you’re mowing.”