Thanks to neonatal expertise at University of Iowa Stead Family Children’s Hospital, an Iowa couple has been able to celebrate key milestones after their babies were born in 2020 at just 27 weeks’ gestation.

Watching 18-month-old Warren Leech navigate a plastic toy slide in the living room of his family home in Independence, Iowa, it’s hard to imagine his rough start in life. As he earnestly pulls himself up the incline, he looks over his shoulder and flashes a sly grin. Warren is doing what toddlers tend to do well: exploring his surroundings, pushing limits, and making sure he has an audience.

But the first four months of Warren’s life were a different story. He spent 127 days in the neonatal intensive care unit (NICU) at University of Iowa Stead Family Children’s Hospital, after he and his twin sister, Emery, were born there on Jan. 22, 2020—three months before their due date. A rupture in Warren’s amniotic sac six weeks earlier had forced his mother, Naomi, on bedrest at the UI hospital, and when the babies were born, Emery weighed only 2 pounds, 8 ounces, and Warren was just 1 pound, 14 ounces. Their diapers were smaller than a dollar bill.

While Emery’s vitals remained relatively stable (she went home after 75 days), Warren faced more serious complications of prematurity. Lack of amniotic fluid during pregnancy had kept his lungs from developing properly, and he was diagnosed with a brain bleed and a urinary tract obstruction. He was hooked up to oxygen, a feeding tube, and a catheter, and was being monitored for kidney problems and an eye disorder in preemies that can lead to blindness. 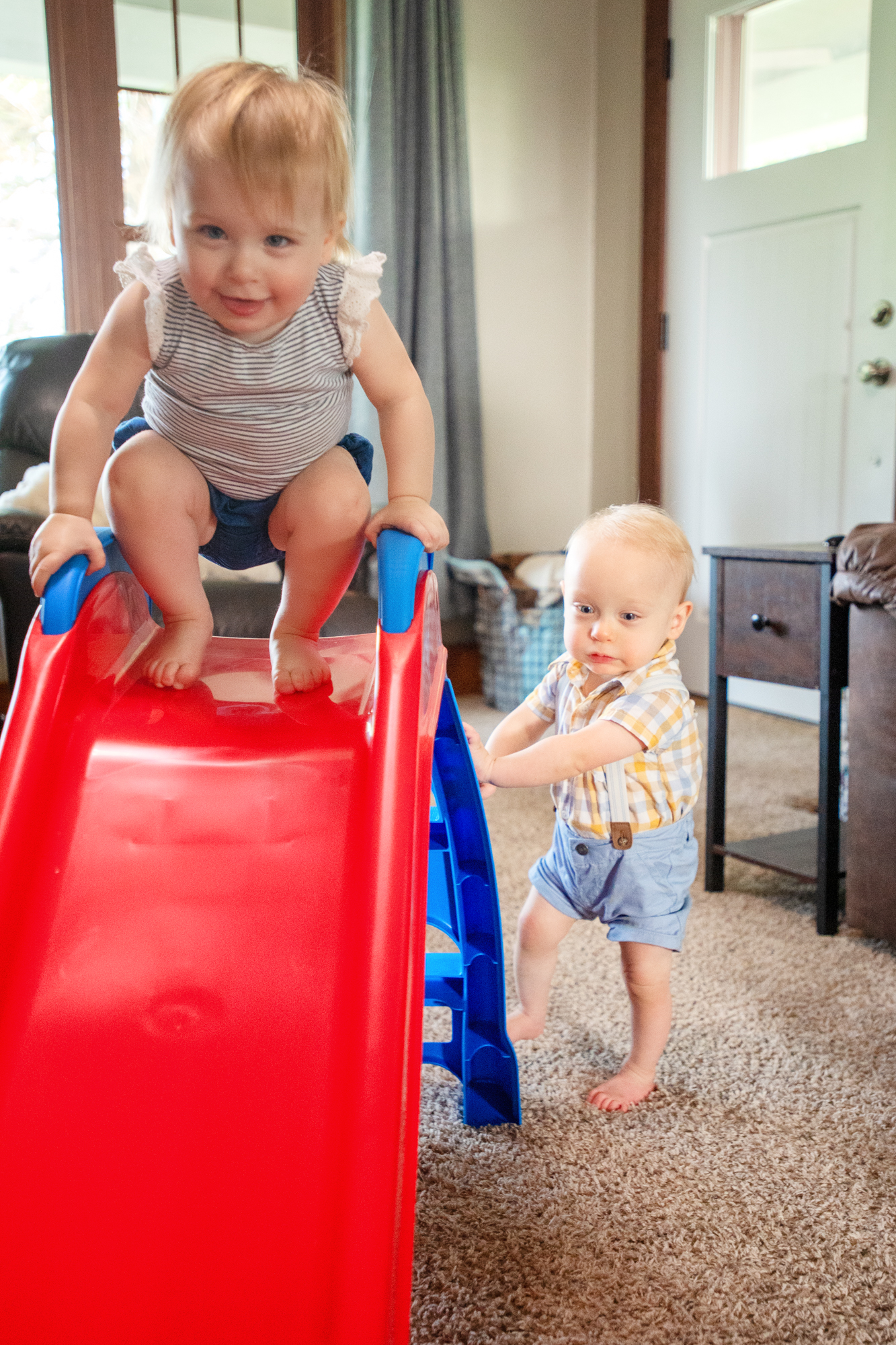 Despite the gravity of the situation, Naomi says she and her husband, Dylan, felt buoyed by the level of care provided at UI Stead Family Children’s Hospital. She stayed in nearby Ronald McDonald House until the pandemic shut it down and then with her brother in North Liberty. Dylan, who worked as a Buchanan County sheriff’s deputy at the time, visited every chance he got.

In May 2020, Warren finally was cleared to go home, and he and Emery have continued to thrive. Naomi says she is grateful to live an hour away from Iowa City and the resources of the state’s largest NICU. She doesn’t take for granted that things could have turned out differently.

“If Warren hadn’t been born at the University of Iowa, I don’t think he would be alive today,” she says. “We knew we were in the best place we could be. And now he is walking, playing outside, and happily destroying the Lego structures that his sister builds.”

Caring for the tiniest of babies

Naomi’s pregnancy was complicated early on, starting with a subchorionic hemorrhage at 8 weeks, followed by more bleeding around 20 weeks. When her provider in Waterloo referred her to the University of Iowa in December 2019, Naomi imagined attending the appointment and getting some holiday shopping done afterward. Instead, she didn’t leave the hospital.

“It’s unnerving when a semicircle of doctors surrounds you and recommends that you stay in the hospital because the babies could come within days or even hours,” she says. “It was hard for me. I’m a bit of a planner and there were so many unknowns at that point.”

When Naomi developed an infection six weeks later, her UI care team decided to do an emergency C-section. She knew her family was getting the best care—and she understood the extra time in utero had been invaluable for her babies.

“It was scary, but I wasn’t worried. The babies had survived the birth, and I knew other moms there were dealing with much worse,” she says. “The doctors were really straight with us about the situation and what could happen, and the nurses were amazing. We stay in touch with some of them today.”

UI Stead Family Children’s Hospital is ranked No. 25 in the nation for neonatology by U.S. News & World Report, employing 13 board-certified neonatologists with nearly 250 years of combined experience. It also is one of few hospitals in the country—and the only one in Iowa—using ultrasound technology to better understand the relationship between the heart and the brain in premature infants, a practice that immediately impacted Warren.

Regan Giesinger, MD, a clinical associate professor of pediatrics–neonatology at Iowa and an early provider of Warren’s and Emery’s care, says that hemodynamics, or the study of blood flow using heart ultrasound, helps her to diagnose and treat premature infants.

“Unlike an adult, who can tell you, ‘I'm feeling dizzy,’ a newborn can’t communicate, so you need to have tools to be able to distinguish a sick baby from a well baby—and, beyond that, to determine why the baby is sick,” says Giesinger, who was recruited by Iowa in 2018 to help start the nation’s first neonatal hemodynamics program. “Using heart ultrasound, we can see exactly where the blood is flowing and where the pressure is higher or lower and how the heart is working to move blood through the lungs and to the organs where it needs to be. Using that tool, I can tell you right away whether and why a baby is sick and offer a therapy that I’m pretty sure is going to work. We don’t have to wait for a couple of hours or a couple of days to find out if we guessed right.”

While the use of heart ultrasound is not new, Giesinger says the concept has evolved over the past decade and the technology has become more sophisticated.

“Particularly in the case of a baby like Warren, who was very sick at the beginning and whose physiology changed multiple times over the course of the first day, having the ability to select and target therapies using dynamics and echocardiography is really the best way we can do exactly what a baby needs at exactly the time the baby needs it,” she says. “Without that care, Warren very easily could have died.”

The survival rate of premature infants cared for at UI Stead Family Children’s Hospital is among the best in the country, and that is due to a group effort, Giesinger says.

If Warren hadn’t been born at the University of Iowa, I don’t think he would be alive today.

“It’s not just the work of one specialist,” she says. “We have a rehabilitation team that focuses on lung growth, one of the most experienced neonatal dietitians in the country, and a neuro critical care team that specializes in the brain and brain monitoring. When you put all of those things together, you do better for babies. Everybody here has experience in their own niche area and is part of a team—that’s how we get stronger, and that’s how we do better for babies.”

And with doctors conducting research to improve upon that care, patients have access to cutting-edge treatments, Giesinger adds. Iowa has experts in every pediatric specialty, something she says is often overlooked.

“If you had a child with a complex congenital heart disease, you would want that child to get that heart disease repaired in a place where people see that complex congenital heart disease multiple times per month. Similarly, in neonatology and the care of babies, if you have a preterm infant or a sick infant, you want that baby to be looked after in a place where they see that exact same thing all the time. Because that’s how providers get good at recognizing patterns and anticipating things,” she says. “At Iowa, we are well equipped to care for a baby weighing less than a pound. Their heart is the size of your thumbnail—and the amount of medication they need is so small compared to what is needed by an adult.”

Like many newly expecting couples, Naomi and Dylan say they never considered the possibility of a premature birth—and the complications that can follow. Not only do they now understand the severity of it and work to raise awareness, they know where they want to be should they decide to grow their family.

“An experience like this changes you,” says Naomi, who brings the twins for routine follow-up care at UI Stead Family Children’s Hospital. “I had no idea this could happen. Thankfully, our community was so supportive. When people ask us for advice, we refer them to Iowa City. If and when we have another kid, we’d like to go to the University of Iowa. I know it’s farther away than other hospitals, but I feel like I’m part of the health care team there. It’s my comfort zone. It feels like home.”

In keeping with University of Iowa Stead Family Children’s Hospital’s history of medical innovation, neonatology experts believe that the use of ultrasound technology to evaluate hemodynamics—a technique that helps doctors understand and improve blood flow and function of the heart—could further boost survival rates and improve outcomes of premature and critically ill infants.

Learn more about our Neonatal Heodynamics