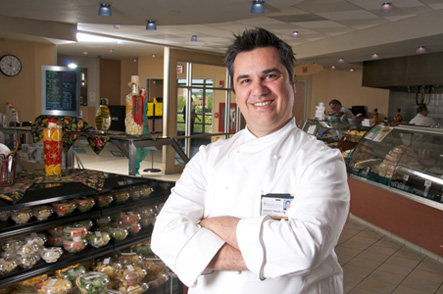 Hilbert C. Stoelk Jr. has tasted cuisines all over the world. He has lived in over nine countries including Turkey, Australia, Iran, Singapore, Indonesia, Greece, and Colombia.

Hib spent 18 years outside the United States, relocating every time his father, who worked in the international construction industry, took on a new project.

“It introduced me to lots of different flavors and foods I don’t think many people get to experience at such a young age,” he says.

Hilbert, known as Chef Hib by his University of Iowa Hospitals & Clinics family, has been the executive chef for four years. Monday through Friday he cooks for hospital patients, visitors, faculty, and staff in the main dining room.

His international experience taught him to be open to new foods—a trait he brings to Iowa. He uses fresh seasonal ingredients to add new and unexpected flavors to traditional meals. When he’s introduced to a new food, he takes a couple months to learn as much as he can about that culture’s cooking traditions and practices. He says he has done this with French, Thai, Indian, and Vietnamese food.

Hib worked at the Ritz Carlton San Francisco, a five star hotel, for 11 years where he mastered the California cuisine. He studied at the California Culinary Academy in San Francisco before applying to the Ritz. He was one of 600 people chosen out of the 12,500 applicants to work in the kitchen. He has also worked at St. Ambrose University in Davenport, IA.

Although Hib was born on a U.S. airbase in the Black Sea city of Ergli, Turkey, “Wilton is what we have always considered to be home,” he says. Hib, his wife, and three sons moved to Wilton, IA to be closer to his retired father, who now makes Wilton his home after 40 years abroad.

Hib says he believes all people should try a new dish at least once. “If you don’t necessarily like it the first time, it might be something you grow to appreciate,” he says.

He also makes easy, healthy recipes for people to make at home. Hib’s recipes are featured on UITV and can be found on YouTube as well as uihealthcare.org.

His advice for any chefs out there—experienced or amateur—is to not be intimidated by the kitchen.

Go in there and try things. If it doesn’t work out, it’s not a big deal…keep on doing it until you can get it. Cooking is supposed to be fun and enjoyable—the process and the results.
- Hilbert C. Stoelk Jr.