Expert spine care helped Gretchen get back to RAGBRAI

Gretchen McLain of Stockport, Iowa, was looking forward to riding RAGBRAI in 2017, but four days before the event, a devastating spine injury put her bike-riding plans on hold indefinitely—but not for nearly as long as you might think.

Gretchen was working on her farm in July 2017 when a couple of 700-pound bales of hay fell from a trailer and landed on her. After her husband, Darrick, miraculously pulled the bales away and called for an ambulance, Gretchen was taken to University of Iowa Hospitals & Clinics, where orthopedic surgeon Cassim M. Igram, MD, fused her fractured spine back together.

Getting on ‘the right path’ 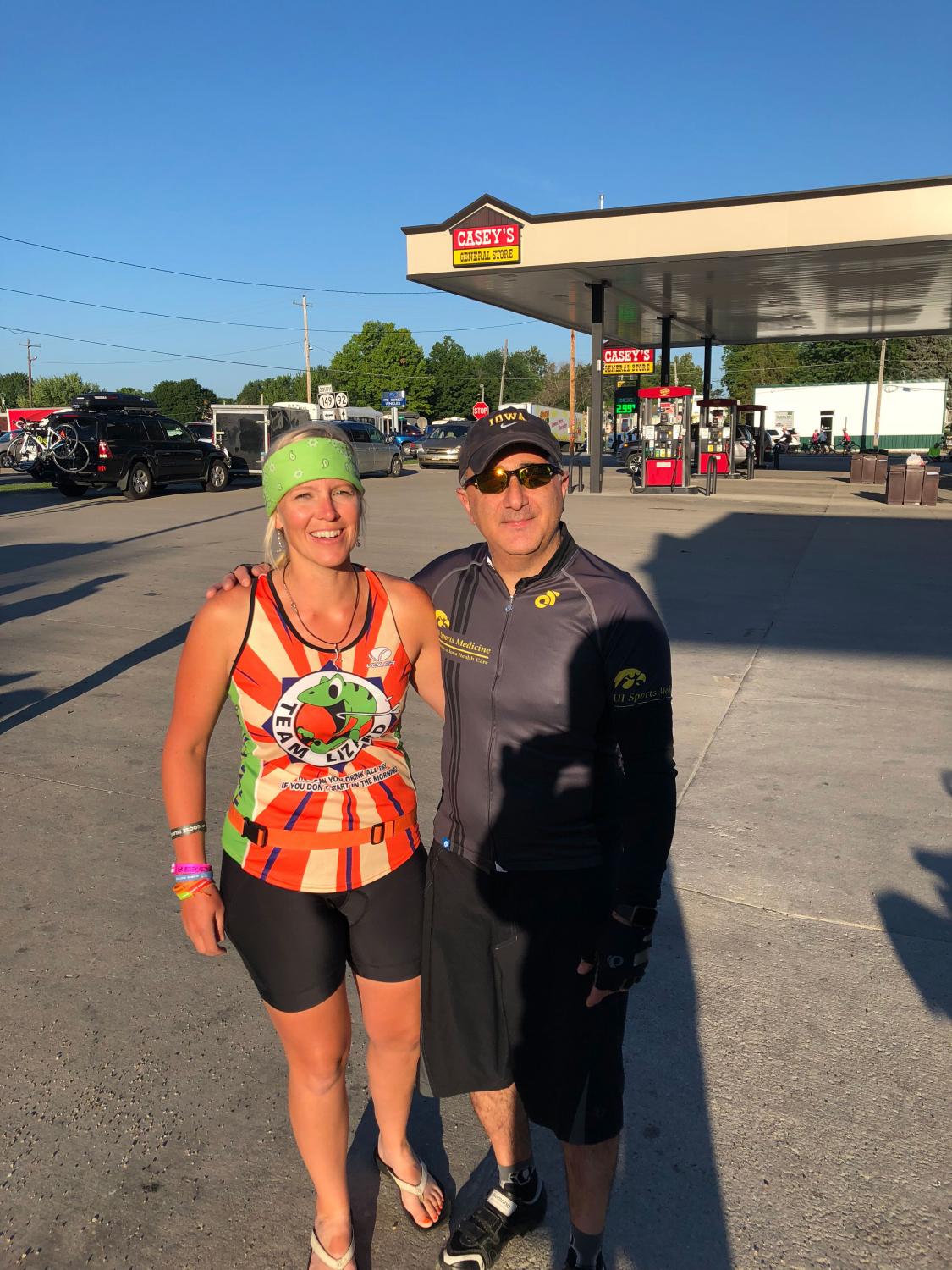 When she left the hospital with a reconstructed spine and no feeling on her left side, Gretchen knew she faced a long rehab that included learning how to walk again. That didn’t stop her from setting what she now calls her “lofty” goal: riding RAGBRAI in 2018.

“I asked Dr. Igram right away, ‘Can I do RAGBRAI next year?’” Gretchen says. “He told me, ‘Absolutely. But we’ll have to make sure we have you on the right path to do that.’”

Consulting regularly with Igram, Gretchen worked with a local physical therapist until December 2017.

“After that, I was on my own,” she says, “lifting weights, riding my bike, and just getting up every day and persevering.”

Against all odds, a meeting in Sigourney

Igram admired Gretchen’s bold plans, and he had no doubt she would do the work. But he admits that when Gretchen walked into his office in July 2018 and told him she would indeed ride in RAGBRAI later that month, she caught him by surprise.

Igram, a devoted RAGBRAI rider himself, can confirm that Gretchen made the whole trip. The two riders met in Sigourney on Friday of RAGBRAI week. Less than a year before that, they were in an operating room together.

“She had ridden from the starting point,” he says. “She’s a very determined, very motivated individual. That’s what led to her remarkable recovery.”

Gretchen says she’s forever grateful for the work Igram and the staff at UI Hospitals & Clinics did to help her heal and thrive, but Igram says all the credit goes to Gretchen, who rehabbed in about half the time most patients do.

“It’s been a pleasure taking care of her,” he says. “She made everybody on the surgical team look good.”

If you have back pain speak to your physician about a referral to University of Iowa Health Care.