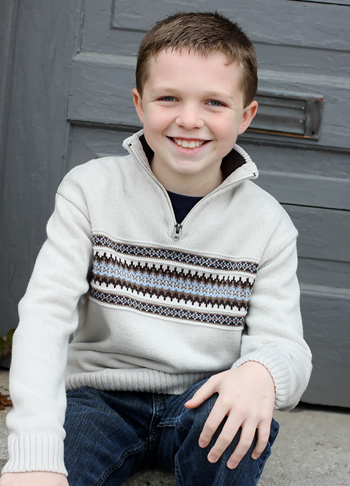 Late one winter Sunday morning, Bruce Brockway and his 10-year-old son Garrett began cleaning up trees and brush that littered the woodsy backyard of their Burlington home. They planned on a few hours of work thanks to a windstorm from a couple of days earlier.

But in one unthinkable moment, the Brockway family’s life changed forever.

While attempting to remove a fallen tree, another fell and struck Garrett on the head. He was unresponsive and bleeding from the nose and was soon being airlifted to University of Iowa Children’s Hospital.

Garrett’s parents, Bruce and Tiffini, were greeted by a social worker within minutes of arriving and were told their son had a serious skull fracture, and that surgery was a matter of life and death. Garrett was taken to the operating room with a team of surgeons waiting for him.

Despite their best efforts, the doctors were not able to save Garrett. The accident had severed a main artery in his brain, and after four days in the Pediatric Intensive Care Unit, Garrett was pronounced brain dead.

In the midst of their grief, Bruce and Tiffini looked at the situation in the way their caring and selfless son would have. They thought, “If we can’t save Garrett, who can we save?”

Through the Iowa Donor Network, Garrett’s heart, liver, pancreas, kidneys, and corneas were donated to recipients ranging in age from 10 to 65. His lungs were donated to cystic fibrosis research, and a number of other tissues were harvested for later use.

“Garrett saved five people, and he’s a hero in our minds,” Tiffini says. “And if other people would be willing to do that and realize it’s not an ugly, scary, bad process, that it truly is a beautiful process, so many more lives could be saved.”

The Brockways are grateful to Garrett’s care team, who also took care of them and their 4-year-old daughter Adeline during their five days at UI Children’s Hospital.

“When you think of a hospital, you think of people coming here to be physically healed,” Bruce says. “I guess we never thought about the healing they gave to us emotionally and mentally.”

“Every person that we interacted with that was an employee of this hospital went above and beyond,” Tiffini adds.

Just five weeks after Garrett passed away, Bruce and Tiffini spoke at the 2013 Medal of Honor Ceremony, commemorating the Silver Medal of Honor that University of Iowa Hospitals & Clinics received for its 22 organ donors and a conversion rate of 85% in 2012.

They told the room of doctors, nurses, staff, patients, and media about their generous and kind-hearted son, who loved Kit Kats, the St. Louis Cardinals, and being a big brother.

In Bruce’s words: “I couldn’t imagine being any prouder than I am of Garrett now, saving lives and being the great young man that he was and continues to be.”