AirCare was the 11th EMS helicopter program in the country and has flown more than 30,000 patients over 3,000,000 miles. We are proud to be a part of the regional EMS system as we work very closely with area first responders, police, fire, and ambulance services to provide safe and rapid response to emergency situations. 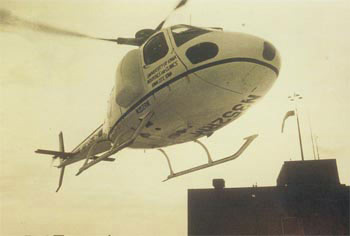 It was no April Fool when AirCare had its first flight on April 1, 1979. Our first aircraft, the D model A-Star (the first A-Star to be utilized for air medical transport in the U.S.) had a transverse loading system (the second picture is of the loading system). No extra room for sure! The flight nurse sat forward going out to a scene and backwards when attending to the patient in a reversible seat. Of note, we flew with one flight nurse for the first seven years of the program. Flying alone with the pilot made for some very interesting flights and you haven't lived until you have done one-person CPR at 5,000 feet! 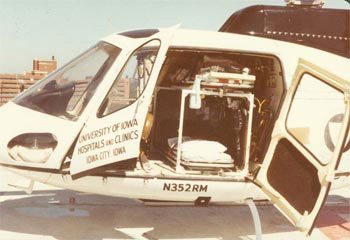 Our first A-Star left much to be desired. It was a cramped area with very little leg space for the patient, making it difficult at times to accommodate those Hare traction splints. We often used the MAST trousers as a pneumatic splint for lower extremity fractures, allowing for easier loading of the patient. It is hard to believe we made it through those early years. 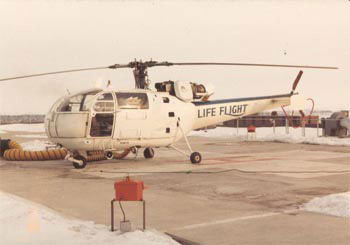 What is that? It is an Allouette III helicopter which was used mostly for mountain flying as its powerful engine was capable of providing plenty of muscle in the thinner air of the mountains. We had the Allouette III helicopter for several months in the early 80s as a spare, while our primary A-Star was going through several modifications addressing the problem of limited patient space.

The unique characteristic of the Allouette was the ability to shut down the spinning rotor blades and keep the engine running. It had a neutral. We used this capability at scenes ensuring a rapid departure, but one major drawback was that its top speed was 80 to 90 knots. It took forever to get anywhere!

After our A-Star came back from the shop, we investigated new and more efficient interior loading systems. In 1983, Omniflight Helicopters won the AirCare contract. Our vendor helped design our first fore-aft loading system, using the available space more efficiently, plus having complete access to the patient. 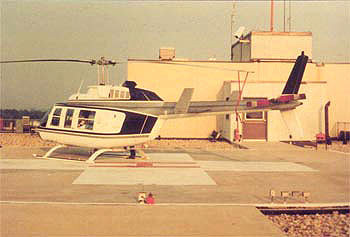 For the first seven years of our program, AirCare averaged more than 900 flights per year, with many flights missed because we were already on another flight. In 1986, Rocky Mountain Helicopters won the contract and has been with us ever since (now operating as Air Methods).

In 1987, due to the ever increasing number of patient transports, AirCare trialed a second A-Star based at the University of Iowa Hospitals & Clinics. 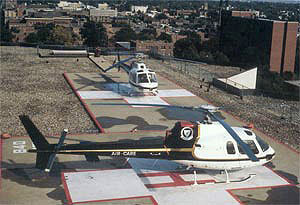 After one year, the second A-Star was moved northward to Schoitz Hospital in Waterloo, Iowa (now based at Covenant Medical Center). AirCare II was put into service in 1988, which provided better response times for the Iowans in the northern tier of counties. 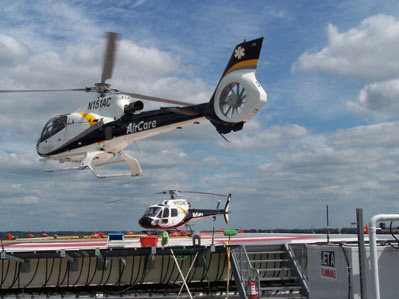 This historical summary is a first-person narrative by Mike Dillard, RN, who was the longest serving member of AirCare. Mike joined the program in 1980 and retired after 30 years with over 3,100 patient transports.